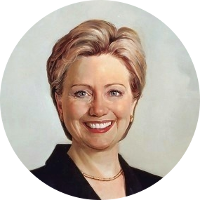 Who is Hillary Clinton?

Hillary Clinton is a former Secretary of State, U.S. Senator, and First Lady of the United States. She was one of the leading candidates for the 2008 Democratic presidential nomination, but lost to Senator Barack Obama who went on to win the Presidential election.

Hillary Clinton was born in Chicago on October 26, 1947, and raised in suburban Park Ridge near O'hare International Airport. In 1975 she married Bill Clinton who went on to become the Governor of Arkansas and the 42nd President of the United States.

Hillary Clinton has a number of famous kin through her French-Canadian roots on her mother's side of the family. As frequently happens with French-Canadian ancestry, Hillary is usually related to other famous people along multiple lines. This includes multiple family relationships to Madonna and Céline Dion among others.