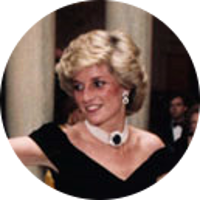 Who was Princess Diana?

Diana became the Princess of Wales when she married Prince Charles, Prince of Wales, on 29 July 1981 at St. Paul's Cathedral in London. The couple had two children, Prince William and Prince Harry, before they were divorced in 1996.

Princess Diana died in a tragic car crash on 31 August 1997 in the Pont de l'Alma road tunnel in Paris, France. While initial reports blamed the crash on the paparazzi that were reportedly chasing her car, a later investigation concluded that the fault was her chauffeur who was driving at high speeds while intoxicated.

It comes as no surprise that Princess Diana has many connections to the Royal Family. What may be surprising is her connections to famous Americans. Presidents George Washington, Thomas Jefferson, and George W. Bush are just a few of the many U.S. presidents that she is related to. She has connections to famous businessmen such as John D. Rockefeller and Walt Disney. Explorer Meriwether Lewis, Actor Humphrey Bogart, and architect Frank Lloyd Wright are just a few of the many other famous cousins to the Princess of Wales.