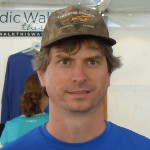 My name is Rich Hall and I've been researching my family history for over 20 years. To me, genealogy is just a natural extension of my interest in history. There's seldom a time when I'm not in the middle of reading some book of historical non-fiction or biography.

FamousKin.com keeps growing and expanding. Keep up with the changes by following us on Facebook and Twitter.

Genealogy is a way for me to place my family into the history that I read about, and to learn more about their individual stories. I'm a member of the Society of Mayflower Descendants through my descent from Mayflower passenger John Alden, and I have two lines of descent from fellow passenger John Billington. If it weren't for my genealogical interest, my knowledge of the Mayflower would probably be limited to what I learned back in grade school.

Sometimes genealogy just needs to be fun, and it can be fun to learn about famous cousins that you didn't previously know about. For example, if you can trace your family back to 17th century New England or Québec, you will probably find more than a few famous cousins. Why? Because of the relatively small group of people from which to descend, and more importantly, many of the early records still exist.

But FamousKin.com really came about from a desire to know the truth. I would often read in the news about a surprising family relationship between two famous people and I would wonder if it was true. Other news organizations would pick up on the story and repeat it. Once published, it became fact regardless of whether or not it was true.

It was claims like this that led me to develop FamousKin.com. I had to know the truth and my research into these kinds of stories began to accumulate. One such claim by a noted genealogist was that accused murderess Lizzie Borden was the cousin of actress Elizabeth Montgomery who ironically portrayed Lizzie in the 1975 television movie The Legend of Lizzie Borden. This claim quickly went viral across the internet, but nowhere could I find just how they were related. After some of my own research into this, I determined that the claim was true.

The Claim About Lady Gaga and Madonna

A few years ago The Boston Globe published a claim that Lady Gaga was a cousin of Madonna. A chart was created by a major genealogical society to support this claim by showing that the relationship was through a shared French Canadian ancestor. The claim was immediately picked up by major news organizations and repeated as though it were fact. The New York Daily News had the headline “Lady Gaga is related to Madonna: Documents show pop singers are ninth cousins once removed” and the UK's Daily Mail also repeated the claim in their publication. Countless news blogs spread the word online and even other genealogists repeated it as fact. But was it true?

FamousKin.com began as a way to share the results of these investigations. It is currently evolving from a site devoted to discovering family connections between famous people into a site that is helping those no-so-famous to connect to them as well. And since it bothers me that most genealogy websites and researchers do not share their sources, I make sure that I share mine. Just click on a name in a chart and you will go to that person's family group page where you can scroll down to see my sources.

The Truth About Lady Gaga and Madonna

Now you may be wondering if the claim about Lady Gaga and Madonna being cousins is true. The chart that was published showed their alleged connection through descents from a French Canadian named Jean Bessette (1642-1707). However, researching the people depicted on the chart did uncover a problem with Lady Gaga's ancestors in Pennsylvania named Jacob and Sarah (Enochs) Bissett.

The chart depicted Jacob Bissett as Jacques Pascal Bessett, son of François Bessette and Marie Fonteneau dite Dumoulin. Jacques was born in 1796 in St-Mathias, Pointe-Olivier, Québec. The problem is that Jacques Pascal Bessett died in 1810 at the age of 14. He was buried in St-Mathias. Although he was related to Madonna, he could not possibly be the Jacob Bissette who went to Pennsylvania and married Sarah Enochs.

So what about Jacob Bissette, the actual ancestor of Lady Gaga? He died sometime after the 1850 census and according to that census, he appears to have been born around 1786 in Maryland and not Québec. The 1830 and 1840 census agree with this birth date which would also make him too old to be Jacques Pascal Bessett.

A quick look at the documents and you have to conclude that the claim is false, Lady Gaga is not related to Madonna through Jean Bessette. In fact, I could not find any French-Canadian ancestors in Lady Gaga's ancestry. If you know of any, I'd love to hear about them.

This is why I created FamousKin.com. I may not always be right, but at least you'll know my sources and can judge that for yourself.