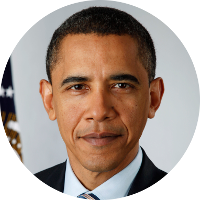 Who is Barack Obama?

Barack Obama was born in Honolulu, Hawaii on August 4, 1961 to Barack Obama, Sr. and his wife Stanley Ann Dunham. He is a graduate of Columbia University and Harvard Law School, and was the President of the Harvard Law Review.

In 2008, Barack was elected as the 44th President of the United States. His ancestry is probably the most diversified of any U.S. President to date. On his father's side, he is of African descent. His father was a member of the Luo people, an ethnic group found in western Kenya, eastern Uganda, and northern Tanzania.

On his mother's side, Barack's family can be traced back through New England to royalty and eventually Alfred the Great and Charlemagne. It is through these connections that Barack is related to many famous people, including but not limited to General Robert E. Lee, President Harry S. Truman, former Vice-President Dick Cheney, actor Robert Duvall, and investor Warren Buffett.