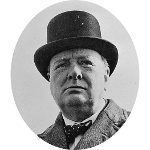 Who was Sir Winston Churchill?

Sir Winston Leonard Churchill was born in Blenheim Palace on 30 NOV 1874 to an aristocratic family. Winston was the son of Lord Randolph Henry Spencer-Churchill and his American wife Jennie Jerome. His father was the Chancellor of the Exchequer and his paternal grandfather was the 7th Duke of Marlborough.

Sir Winston Churchill was arguably one of the greatest wartime leaders of the 20th century. He served as Prime Minister of the United Kingdom during the Second World War from 1940 to 1945, and again from 1951 to 1955.

In his early years, Churchill served as an officer in the British Army and saw combat in India, Sudan, and the Second Boer War in southern Africa. He was also a war correspondent, historian, and artist. He created over 500 paintings, wrote a number of books, and became the first British Prime Minister to have won the Nobel Prize in Literature (1953).

In his later years, Churchill turned to politics and served in a number of offices including that of Prime Minister. In 1953 Churchill accepted a knighthood in the Order of the Garter.

Churchill's aristocratic ancestry through his father makes it unsurprising that he is a cousin to Prince William, Duke of Cambridge, and Prince William's mother Princess Diana.

Some people are surprised to find out the mother of Sir Winston Churchill was an American. She connects him to a number of notable American patriots, such as Boston Tea Party participant Samuel Howard and Declaration of Independence Signers Roger Sherman, Button Gwinnett, and Thomas Jefferson. It seems only fitting that he became the first person to be proclaimed an Honorary Citizen of the United States (1963).