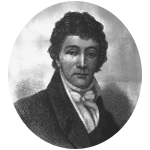 Author of “The Star Spangled Banner”

Who was Francis Scott Key?

Francis Scott Key was a lawyer, author, and amateur poet. He was appointed as a United States District Attorney in 1833, and in 1835 he prosecuted Richard Lawrence for his attempted assassination of President Andrew Jackson. His everlasting fame is due to having written the lyrics to the U.S. national anthem "The Star Spangled Banner."

Francis is the son of Capt. John Ross Key and Anne Phebe Charlton and was born on his family's plantation known as "Terra Rubra" in Frederick (now Carroll) County, Maryland.

During the War of 1812, Francis Scott Key and John Stuart Skinner boarded the British warship HMS Tonnant to negotiate a prisoner exchange. During dinner with Vice Admiral Alexander Cochrane, Rear Admiral George Cockburn, and Major General Robert Ross, the Americans learned of the strength of the British forces and their intent to attack Baltimore. As a result, they were held by the British until after the battle.

On the night of September 13, 1814, the British began bombarding the Americans at Fort McHenry. Francis Scott Key could do nothing but watch the bombardment from a British warship. The next morning as dawn approached, he observed that the American flag was still waving.

On Key's trip back to Baltimore, he was inspired to write a poem entitled "Defence of Fort McHenry" which was then set to the tune of a popular British song written by John Stafford Smith. The poem now set to the song was renamed "The Star Spangled Banner" and would later become the nation's official national anthem.

It seems only fitting that the author of our nation's national anthem should include some of America's most prominent patriots as kin. Francis Scott Key is a distant cousin to Presidents George Washington, Thomas Jefferson, and James Madison, as well as our nation's first U.S. Treasury Secretary Alexander Hamilton. Francis is also related to Benjamin Harrison V, a signer of the Declaration of Independece and the father and great-grandfather to Presidents William Henry Harrison and Benjamin Harrison.

Although an American patriot, Francis Scott Key can also claim some Royal English connections among his kin. He is related to both Prince William, the Duke of Cambridge, through his mother Princess Diana, as well as to William's bride Catherine Middleton, the Duchess of Cambridge.

In addition to the relations mentioned above, Francis Scott Key also has many other famous kin. This includes a number of other U.S. Presidents, Gen. Robert E. Lee, Meriwether Lewis, Walt Disney, the infamous Lizzie Borden, and many others.