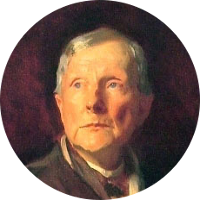 Founder of the Standard Oil Company

Who was John D. Rockefeller?

John D. Rockefeller was an American industrialist and philanthropist. He was the founder of the Standard Oil Company which became the first great U.S. business trusts. Standard Oil would go on to make Rockefeller the richest man in the world and the first to reach a billion dollars.

Rockefeller once said, God gave me my money. But in reality, it was oil that gave Rockefeller his billions. By the time of the Civil War, whale oil had become too expensive for the majority of Americans to use to light their homes. The petroleum boom in western Pennsylvania created a cheap alternative and Rockefeller was there at the beginning to exploit it.

Rockefeller is said to have amassed a fortune that in today's dollars would be worth well over $600 billion dollars. To put that in perspective, the richest person in the world today is Mexico's Carlos Slim with a total net worth of around $69 billion.