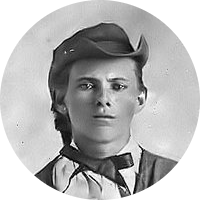 Who was Jesse James?

Jesse James and his brother Frank were notorous outlaws during the heyday of the American West.

The James brothers were both born in Missouri, the sons of Robert and Zerelda (Cole) James. James was born on September 5, 1847 and his brother Alexander Franklin "Frank" James was born January 10, 1843. There father died while the boys were young and their mother was married a couple of more times after his death.

During the Civil War the James brothers were Confederate guerrillas in Missouri. Frank joined Quantrill's Raiders and eventually followed Quantrill to Texas. When Frank returned to Missouri with a group of the raiders, Jesse joined the group.

After the leader of their group was severely wounded, the brothers joined up with Bloody Bill Anderson's group. The brothers were accused of committing atrocities against Union troops when they reportedly participated in the Centralia Massacre where Anderson's bushwackers killed or wounded 22 unarmed Union soldiers.

After the Civil War, the James brothers took up crime as the more famous members of the James-Younger gang. The gang committed train robberies, bank robberies, and murder from 1866 until 1876 when an attempted robbery of the Northfield, Minnesota bank resulted in the deaths and capture of some of the gang. While Frank retired from crime after that attempt, Jesse returned to crime by forming a new gang in 1879.

The end came for Jesse James on April 3, 1882 when a member of the gang, Robert Ford, shot Jesse in the back of the head in an attempt to collect a $10,000 reward. Jesse had by then become America's most wanted criminal.

The Royal Ancestry of Jesse James

Susanna Norwood is the 6th great-grandmother of the outlaw Jesse James. She is also the key to his royal ancestry through her father Capt. John Norwood who came to Virginia from England about 1650.

Harry Newman in his "To Maryland from Overseas" states the following about Capt. John Norwood:

“John Norwood who emigrated to Anne Arundel Co. 1650 from Virginia was born 1605 at Wykeham Abby, Lincolnshire, and was the son of Tyringham Norwood (1576-1625) at Wykeham, Spaulding, Linc. - REF: Professional English research commissioned in 1961 by Norwood descendant.”

This reference to “professional" research is what links Capt. John Norwood of Virginia to Tyringham Norwood of England. Harry Newman died shortly after publishing this account and the details regarding this 1961 research apparently has not been published. So without further research, any royal cousins or famous kin through Capt. John Norwood should be prefixed with the adjective ”probable."