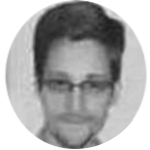 Who is Edward Snowden?

Edward Snowden is the ex-CIA employee and NSA contractor who leaked top secret United States, Israeli, and British government mass surveillance programs to the press. He is now considered America's most infamous traitor by many, and yet a hero by others. He is currently a fugitive who has been granted asylum in Russia.

Edward Snowden has a number of famous kin through their common ancestor Adam Winthrop. Adam was grandfather of Massachusetts Bay Colony Governor John Winthrop and the 13th great-grandfather of Edward Snowden. Interestingly Snowden's kin through Adam Winthrop include two rather infamous people, Aaron Burr and Dr. H. H. Holmes. Aaron Burr was a Vice President during Thomas Jefferson's first term as president, but he is mainly remembered for killing Alexander Hamilton in a duel. Dr. H. H. Holmes is the notorious serial killer who preyed mostly on women in and around Chicago's 1893 Columbian Expedition. He was the focus of Eric Larson's book The Devil in the White City.