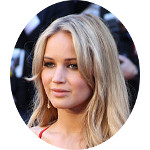 Who is Jennifer Lawrence?

Jennifer Lawrence is a young American movie actress who has already racked up an incredible number of awards including the second youngest ever to win an Academy Award Oscar for Best Actress in Silver Linings Playbook. More recently she won the Golden Globe Award for Best Supporting Actress for her role in American Hustle. She has received international stardom through her roles in the X-Men and The Hunger Games film series with the first two films in the latter series making her the highest grossing action heroine of all time.

Jennifer Lawrence's link to the Jefferson family is through her 4th great-grandmother Nancy Ann Jefferson, daughter of John Robertson Jefferson. However the evidence is somewhat circumstancial. There is evidence that John Robertson had a daughter named Nancy. There is also a marriage record that Nancy Jefferson married Samuel Steger in Powhatan County, Virginia, in 1813. There is no doubt that Jennifer Lawrence's 4th great-grandfather was named Samuel Steger, but his wife was known as Ann. Secondary sources refer to his wife as Nancy Ann Jefferson.

The conclusion that Ann Steger, wife of Samuel Steger, is the same person as Nancy Jefferson who married Samuel Steger in 1813, and is the daughter of John Robertson Jefferson, needs more research. It is for this reason that the Famous Kin charts showing Jennifer Lawrence's relationship to the Jefferson family are marked as probable next to this connection.