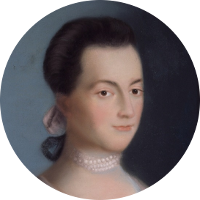 Who was Abigail Adams?

Abigail Adams was born on 11 November 1744 in Weymouth, Massachusetts to the Rev. William and Elizabeth (Quincy) Smith. She married John Adams, Jr. on 25 Oct 1764 in Weymouth. Abigail is known for the many letters that she and her husband wrote to each other during his time in Philadelphia as a member of the Continental Congress.

Abigail has some interesting famous kin including her husband who was a 3rd cousin. Some of her closest famous kin include Sir George Downing, namesake of the famous Downing Street in London, and Gov. John Winthrop who was one of the founders and Governor of the Massachusetts Bay Colony.

Among her more distant kin, Abigail can include both George Washington and Thomas Jefferson, the 1st and 3rd Presidents of the United States. There is also a royal connection that includes both Prince William, Duke of Cambridge, and his wife Catherine Middleton, Dutchess of Cambridge.