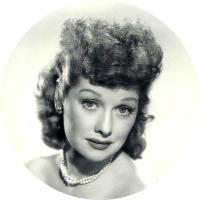 Who was Lucille Ball?

Lucille Ball was an American movie and television actress who is most remembered for her comedic roles. She is especially remembered for her role as Lucy Ricardo in the I Love Lucy television show. She was married fellow entertainer Desi Arnaz who co-starred in the show as Ricky Ricardo. Their production company Desilu Productions would go on to produce other hit shows such as Star Trek and The Dick Van Dyke Show. Ironically Dick Van Dyke has a kinship to Lucille Ball (see kinship charts). As head of Desilu Productions, Lucille Ball would become the first woman to run a major television studio.

A little known fact about Lucille Ball is that she was a registered Communist. In the 1930s Lucille registered her party affiliation as Communist. Later in the 1950s, Lucille gave testimony to the House Committee on Un-American Activities and stated that she was not a Communist and had registered to vote Communist at the insistence of her socialist grandfather.

Lucille Ball is kin to a number of U. S. presidents and first ladies, including but not limited to Calvin Coolidge, his wife Grace (Goodhue) Coolidge, Franklin Pierce, and Ulysses S. Grant. Some of her closer kin include Declaration of Independence signer Oliver Wolcott, poet Robert Frost, and Red Cross founder Clara Barton. She has a kinship to fellow comedic actor Dick Van Dyke, and to movie actors Humphrey Bogart and Clint Eastwood.