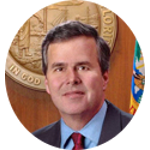 Who is Jeb Bush?

Jeb Bush has numerous kinships to other presidents, historical figures, Hollywood entertainers, and royalty. One of the more interesting connections is that with both President Barack Obama and Governor Mitt Romney, who fought it out in the 2012 Presidential election.

It has been said that almost one third of all Americans can claim kinship to Jeb Bush. This is because Jeb Bush has New England, Mid-Atlantic, and Southern ancestry dating back to 17th century colonial America. According to genealogist Gary Boyd Roberts, author of Ancestors of American Presidents, the ancestry of Jeb Bush's parents, President George H. W. Bush and Barbara Pierce, is pretty evenly divided between these groups which is why so many Americans, including other Presidents, can claim kinship to them.

One of the most important events in American history is the arrival of the Mayflower at Cape Cod in 1620. Jeb Bush is a direct descendant of Mayflower passengers Henry Samson and Francis Cooke. Henry Samson was a 16 year old teenager in the custody of his uncle Edward Tilley when he made the voyage. Edward Tilley died that first winter in New England, but Henry Samson survived. Francis Cooke was 37 when he made the voyage with his 13 year old son John. Francis was among those who signed the Mayflower Compact in 1620. They were joined by the rest of their family when Francis's wife and children arrived in 1623 aboard the ship Anne.

While Jeb Bush may not be loved by the Republican conservative Tea Party movement, his family did play a role in the original event from which the Tea Party derived its name. Jeb Bush is a direct descendant of Samuel Howard who on December 16, 1773, along with other “Sons of Liberty,” boarded ships in Boston Harbor and dumped over 300 chests of tea into the water. Over half a century later, this event would come to be known as the Boston Tea Party.