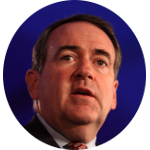 Who is Mike Huckabee?

Mike Huckabee was the 44th Governor of Arkansas. He is an ordained Southern Baptist minister and was host of the television talk show Huckabee and the daily radio program The Mike Huckabee Show. He is a Republican noted for his fundamentalist views and has written several best-selling books.

Mike Huckabee has several family connections to Presidential kin including Rutherford B. Hayes, Franklin D. Roosevelt, James Garfield, Grover Cleveland, and both Presidents George Bush. As a former state governor, it is interesting to note that he has connections to former governors Howard Dean and Jeb Bush. Mike Huckabee also has a connection to the current royal family through Princess Diana.

Although there probably was some relationship between all these Armistead men, what their relationships were is unknown. So at this point, any claimed ancestors of this Francis Armistead would have to be met with skepticism unless new evidence emerges.