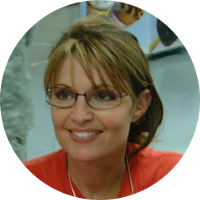 Who is Sarah Palin?

Sarah Palin was the 9th Governor of Alaska until she resigned in 2009. In 2008 she was the Republican nominee for Vice President, running alongside Arizona Senator John McCain. Since leaving political office, Sarah Palin has been a staunch supporter of the Republican Tea Party movement and a political commentator on Fox News. In 2014, she debuted in a new reality show on the Sportsman Channel called Amazing America with Sarah Palin. Later that same year she launched her own online news network called the Sarah Palin Channel. The channel has since been shuttered.

Sarah Palin has one of the most well connected families with regards to famous people in her family tree with the possible exception of former President George W. Bush. She descends from at least five Mayflower passengers, Henry Samson, John Howland, John Tilley, Richard Warren, and William Brewster. She is also a distant cousin to Mayflower passenger Richard More.

Sarah Palin also has a number of celebrities in her family tree. They include, but are not limited to, Matt Damon, Katharine Hepburn, Raquel Welch, Kyra Sedgwick, David Hyde Pierce, John Lithgow, John Ritter, and Kevin Bacon. Some of her literary kin include poets Henry Wadsworth Longfellow and Ralph Waldo Emerson. She also has royal connections to King Henry VIII, King Leka I of Albania, Queen Elizabeth II, and the late Princess Diana.