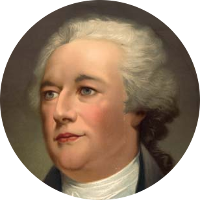 1st U.S. Secretary of the Treasury

Who was Alexander Hamilton?

Alexander Hamilton was born 11 January 1755 in Charlestown on the island of Nevis in the British West Indies. He was born out of wedlock to James Hamilton and Rachel Fawcett. His father was the son of a Scottish Lord.

Hamilton is considered one of the great patriots and Founding Fathers of the United States. He was a member of General George Washington's staff during the Revolutionary War and later became the first Secretary of the Treasury in 1789 and helped to oversee the founding of the U.S. Mint at Philadelphia. His portrait currently adorns the U.S. $10 bill.

Unfortunately Hamilton's life came to a tragic and early end at the age of 49 on 12 July 1804. The day before, in a duel at dawn just across the Hudson River from Manhattan, Alexander Hamilton was mortally wounded from a shot by then Vice President Aaron Burr.