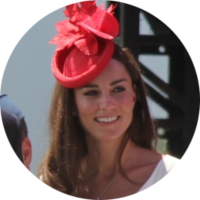 Who is Catherine Middleton?

Catherine Middleton, Duchess of Cambridge, is married to Prince William, Duke of Cambridge and son of Princess Diana. The couple were married at Westminster Abbey on 29 April 2011 in what became a worldwide media event.

Catherine was born at Royal Berkshire Hospital in Reading, Berkshire, England. She is the daughter of Michael Francis Middleton and Carole Elizabeth Goldsmith. Catherine's parents are the founders of Party Pieces, a family business that helps parents to create and organize theme based parties.

Prior to marrying Prince William, Catherine could already claim a Royal family connection to her future husband. Catherine is a distant cousin to Prince William and his mother Princess Diana. One of their many common ancestors is that of Sir Thomas Fairfax who was married to Agnes Gascoigne. Sir Thomas is Catherine's 13th great-grandfather and William's 14th great-grandfather.