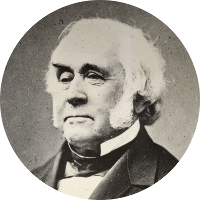 Who was Ichabod Goodwin?

Ichabod Goodwin was the 27th Governor of the state of New Hampshire. He started his career as a merchant and eventually went on to own a textile factory, a couple of banks, and a couple of railroads. Ichabod Goodwin was also the father-in-law of Admiral George Dewey who was the only person in the history of the United States to have achieved a rank of Admiral of the Navy.