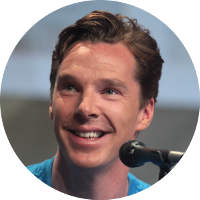 Who is Benedict Cumberbatch?

Benedict Cumberbatch is a British movie, television and theater actor. He is probably best known for his role as Sherlock Holmes in the BBC and PBS co-produced television show Sherlock. Some of his more memorable movie roles include those in Star Trek Into Darkness (2013), The Imitation Game (2014), and Marvel Comics’ Doctor Strange (2016).

Benedict Cumberbatch’s family tree has occasionally made headlines when it has been revealed that the actor has a family connection to a role such as his kinship to Sir Arthur Conan Doyle (author who created Sherlock Holmes) and Alan Turing (subject of The Imitation Game). The one connection for the British actor that apparently hasn’t been revealed until now is Benedict Cumberbatch’s American ancestor who descends from Mayflower passenger John Alden. With the 400th anniversary in 2020 of the Mayflower’s arrival in New England, perhaps the role of John Alden is in his future.