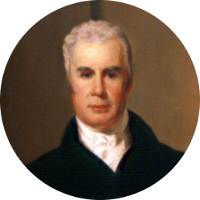 Who was Charles Carnan Ridgely?

Charles Carnan Ridgely’s ancestry can be trace back to William the Conqueror and King Edward I. He is also a direct descendant of Magna Carta Surety Sir Saher de Quincy. He also has family connections to the current royal family through the late Princess Diana. His U.S. presidential kin include George Washington, James Madison, William Henry Harrison, William Howard Taft, Calvin Coolidge, and many others.