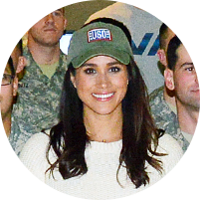 Who is Meghan Markle?

Meghan Markle is an American actress known mostly for her role as Rachel Zane on the USA Network’s legal drama Suits. In November 2017, she became engaged to Prince Harry, son of Prince Charles and the late Princess Diana.

While any royal ancestry for Meghan Markle should be considered a little premature, see “Unproven Claims” below, she does have a few U. S. Presidential family connections including Millard Fillmore, Richard Nixon, and Gerald Ford. Her literary kin include “Fireside” poet John Greenleaf Whittier, Western author Louis L’Amour, and historical non-fiction author Nathaniel Philbrick.

Meghan Markle has a number of fellow celebrities in her family tree including Christopher Lloyd, Kyra Sedgwick, James Dean, John Lithgow, William H. Macy, and Kelsey Grammer. She also has a relatively close relationship to the Devil in the White City killer Dr. H. H. Holmes (aka Herman Webster Mudgett).

Many newspaper publications, online news sites, and Wikipedia have made the claim that Meghan Markle is a distant cousin to her fiance Prince Harry through their common ancestor of Ralph Bowes, a 15th century High Sheriff of County Durham. Despite these claims, no evidence has been found to show Meghan’s ancestor John Hussey is the same John Hussey who was the son of George Hussey, and grandson of Thomas Hussey and Bridget Bowes. Bridget was the granddaughter of Ralph Bowes. Without any evidence proving the two John Husseys are one and the same, the family connection between Meghan Markle and Prince Harry should be considered speculation and unproven.