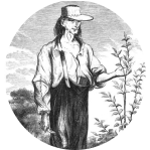 Who was Johnny Appleseed?

Johnny Appleseed is an American legend. He was born John Chapman on 26 September 1774 in Leominster, Massachusetts to Nathaniel and Elizabeth (Simonds) Chapman.

John Chapman traveled from Pennsylvania to Illinois on foot planting apple seeds and cultivating nurseries wherever he went. He would locate his nurseries along streams and surround them with a brush fence. John traveled hundreds of miles each year to visit his nurseries and prune the trees.

When the settlers followed, John would sell his trees to them for a "fip-penny-bit" which was about 6 cents per tree. If the settler didn't have the money, he would barter with them or extend them credit.

John's mission was a peaceful one and he never carried a weapon or killed anything, even for food. It has been said that the Indians regarded him as a great "Medicine Man." Along the way, John became known as "Johnny Appleseed" and became a national folk hero.

His final mission was to a nursery near Fort Wayne, Indiana, where he had heard that cattle had broken into the nursery and were destroying his trees. The day was cold with occasional flurries as John walked the 20 miles to the nursery. At 70 years of age, the trip appeared to be too much for John as he lodged at the home of William Worth. In the morning they found John suffering from a high fever and he died on 18 March 1845.

It is said that Johnny Appleseed was "buried in David Archer's graveyard, two and a half miles north of Fort Wayne, near the foot of a natural mound, and a stone was set up to mark his grave." Today there is a gravesite memorial in Fort Wayne's Archer Park which has been included in the National Register of Historic Places.