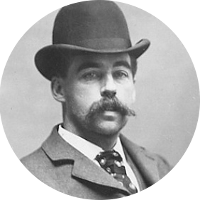 Serial Killer aka “Devil in the White City”

Who was Dr. Henry Howard Holmes?

Dr. Holmes built his hotel specifically with murder in mind. The hotel included soundproof bedrooms fitted with gas lines that let him asphyxiate some of his victims. A huge soundproof bank vault was built near his office where he suffocated others. The hotel had hidden passageways and a secret chute that allowed him to dump bodies directly to the basement. In the basement he built a crematorium and lime pits where he could dispose of bodies or body parts. Some of his victims were dissected and stripped of their flesh so that he could sell their organs and skeletons to medical schools.

Most of Dr. Holmes's victims were women, but not all. While he originally confessed to over 100 murders, Dr. Holmes later recanted and said the total was only 27. Erik Larson's bestselling book The Devil in the White City chronicled his crimes during the fair. A movie of the same title is scheduled for release in 2014.

The famous kin of Dr. Holmes includes some notable people. One of the more interesting is his kinship to the infamous Aaron Burr, Vice President during the administration of Thomas Jefferson. Aaron Burr is best known for killing Alexander Hamilton in a duel. Dr. Holmes's presidential connections include Presidents John Quincy Adams, Chester Arthur, and Herbert Hoover. He also has royal connections to Princess Diana, Prince William, and the young Prince George.