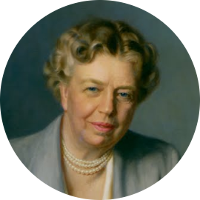 Who was Eleanor Roosevelt?

Although Eleanor would emerge as one of the most respected and admired of the First Ladies, her life was not without personal tragedy. At the age of 10, Eleanor"s father Elliott Roosevelt committed suicide by jumping out a window. Although he survived the initial fall, he succumbed to his injuries just a few days later.

In 1918, Eleanor discovered that her husband Franklin was having an affair with her social secretary Lucy Mercer. She learned of the affair through the discovery of letters to Lucy found in his suitcase. Eleanor threatened divorce if Franklin did not end the affair which he subsequently did. However, many years later Franklin resumed seeing Lucy and it was she, and not Eleanor, that was with Franklin when he died at Warm Springs, Georgia in 1945.

Eleanor Roosevelt has one of the more prolific ancestries when it comes to famous kin. In addition to the obvious relatives of her uncle President Theodore Roosevelt, and her husband and cousin President Franklin D. Roosevelt, she is also related to Presidents Martin Van Buren, William Henry Harrison, and Benjamin Harrison. Other family relationships include inventor Thomas Edison, the infamous Lee Harvey Oswald, and Confederate Generals Robert E. Lee and J.E.B. Stuart.

A descendant of Charlemagne and Alfred the Great, she is more distantly related to President John Quincy Adams, Alexander Hamilton, Meriwether Lewis (of Lewis & Clark fame), and the notorious Lizzie Borden.