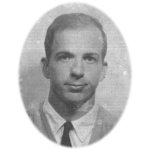 Who was Lee Harvey Oswald?

He served as a U.S. Marine radar operator before defecting to the Soviet Union in 1959. By 1962, Oswald had reportedly had enough of the Soviet Union and returned to the United States. He brought with him his Soviet wife Marina and their infant daughter.

On October 16, 1963 Oswald started a new job at the Texas School Book Depository. It was from this location just over a month later on November 22 that Lee Harvey Oswald shot and assassinated President John F. Kennedy.

Lee Harvey Oswald's ancestry includes famous as well as infamous kin that includes the notorious Lizzie Borden. Lizzie was widely believed to have participated in the murder of her father and step-mother although she was later acquitted of the charge.

Some of Oswald's more prestigious kin include President James Madison, President Theodore Roosevelt, First Lady Eleanor Roosevelt, and Confederate Major General J.E.B. Stuart. He is also related to royalty and is a direct descendant of both Charlemagne and Alfred the Great.