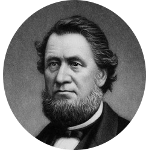 Click on the names below to see their relationship charts

Co-Founder of General Motors and Founder of Frigidaire

“The Witch of Wall Street”

Signer of the Declaration of Independence

First woman executed for murder in U.S. by non-British government