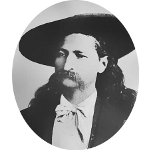 Who was Wild Bill Hickok?

Wild Bill Hickok was an American folk hero. His exploits as a gunfighter, scout, and lawman were legendary and he became the topic of many fictionalized accounts.

He was born James Butler Hickok on 27 May 1837 in Troy Grove, Illinois. His parents were William Alonzo Hickok and Polly Butler.

Prior to the Civil War, Wild Bill claims he was called Shanghai Bill, but because of his big nose and a protruding upper lip, some of his enemies referred to him as Duck Bill. He is said to have started calling himself Wild Bill by 1861 and by 1869 newspapers were referring to him as Wild Bill as well.

In 1876 at a saloon in Deadwood, South Dakota, Jack McCall snuck up behind Wild Bill and shot him with a single bullet to the back of the head. Wild Bill was playing poker at the time and never knew what hit him. Much later it was reported that the hand he held at the time of his murder was a pair of black aces and a pair of black eights. The fifth card is unknown. This has become known as "The Dead Man’s Hand".