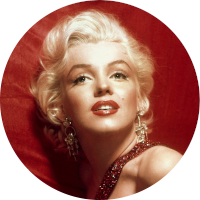 Who was Marilyn Monroe?

Marilyn Monroe was born Norma Jeane Mortenson and was raised under the name Norma Jeane Baker. Marilyn's birth certificate names Martin E. Mortensen as her father, however her mother had separated from him before her pregnancy and she immediately changed Marilyn's name to Baker, the name of her first husband. Throughout her life, Marilyn denied her father was Mortensen. Marilyn identified Charles Stanley Gifford, a studio co-worker of her mother, as her real father.

It is through Charles Gifford that Marilyn has her connections to so many famous kin. She is a direct descendant of Mayflower passenger Francis Cooke. Marilyn Monroe also has a kinship with both President Abraham Lincoln and Senator Stephen A. Douglas. It was Senator Douglas who participated with Abraham Lincoln in the famous Lincoln-Douglas Debates. There are also a number of presidential and royal connections in Marilyn's ancestry including one of the latest additions to the current royal family, Prince George.